A while back I wrote on Internet TV that covers majority of US. Internet TV in China is a totally different ball game compared to US. While in US you have just 3 major companies competing the in the market space. In China ~ there are like 10 video steaming companies. The leader in the market space is likely Youku after its merger in Tudou. Youku is like a combination of youtube + Netflix. But internet TV in China is really anyone’s game from Youku, to Sohu to QQ TV (owned by tencent to iQiy own by (Baidu) there are no clear leaders who would really emerge in this tough market space. Oh I forgot to mentioned Alibaba is joining the marketspace and Google backed Xunlei is another competitor in this space.

My personal favorite for for video streaming is Funshion simply because it allow me to stream in Singapore without the need of VPN – most of the video streaming site requires you to be located in China before you can watch any videos (due to copyright issues).

I really cant pick a winner for the China Market and I would advise not to bet on any video streaming sites with revenue generating mainly from Internet TV. If i really have to choose a stock to invest in China growing internet TV market, I would grab either QQ or Baidu.

QQ dominate the messaging services in China like how whatsapp dominate the English speaking world. Almost everyone of my China friend have a QQ account. With the broad user base, it has a significant lead in converting users into “watchers”

Baidu, dominate the search market like how Google works for the rest of the world. It will likely wrestle its way to to have a piece of China Internet TV. 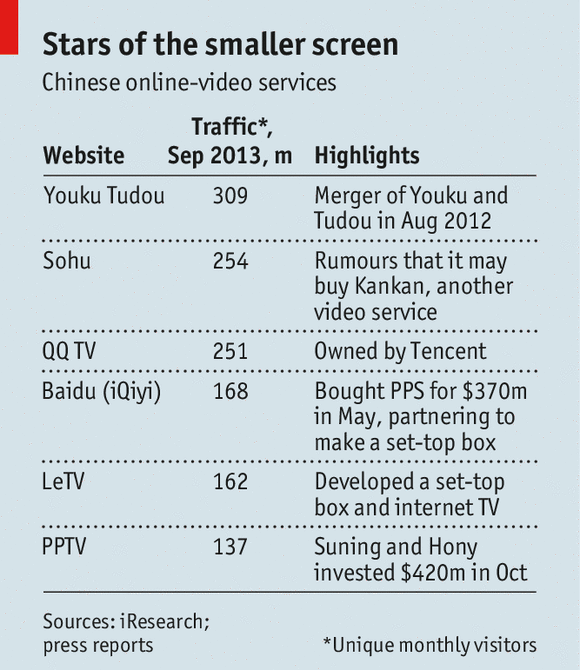 The end of cable, but who will win the internet TV